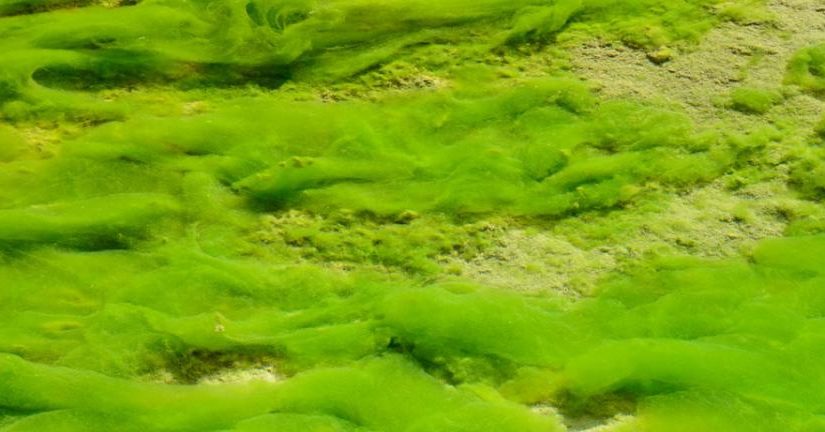 Algae can be found residing in oceans, lakes, rivers, ponds and even in snow, anywhere on Earth. Algae needs nitrogen and phosphorus to live, so when many nutrients are in the environment, the algae can grow at a very fast rate.

Some algal blooms are the result of an excess of nutrients (particularly phosphorus and nitrogen) into water(our body) and higher concentrations of these nutrients in our body cause increased growth of our algal flora.

Human urine is full of nitrogen, phosphate(phosphorus), carbon and organic compounds. Human urine turns out to be excellent breeding ground for algae.

Urine is a powerful plant fertilizer. When we flush it into sewers its fertilizing potential ends up in the wrong places–rivers, lakes, and bays–where it encourages algae to grow out of control, with severe consequences.

Prototheca is an environmental contaminant found in sewers, water systems and soil and is the only plant known to colonize humans and animals. It’s food is organic carbon and nitrogen. Prototheca species assimilate glucose, fructose, and galactose; disaccharides are not metabolized. All species require thiamine and oxygen for growth, but light does not promote growth.

The cells in our bodies are full of water. The brain and heart are composed of 73% water, and the lungs are about 83% water. The skin contains 64% water, muscles and kidneys are 79%, and even the bones are watery: 31%.

FUN FACT: Algae grows where water and sunlight meet. 60% of the human body is water and some of our body meets sunlight on the daily.

Not too long ago we humans didn’t even know that there were such a thing as human algae much less that its existence in and on our body can result in pathological features and conditions.

Below is just a glance at this novel species and how it works. The link to the original content is linked below. I imagine this will eventually be known as a major player in the pathogenicity of cancers. Enjoy and say hello to your little friends…8)

They are a saprophyte which is a plant, fungus, or microorganism that lives on dead or decaying organic matter. That is pretty much every inch of our body and its soft tissues.

Prototheca species are globally ubiquitous(everywhere) and can be isolated from various reservoirs, such as the environment, animals, and food. Typical sources of Prototheca species are the slime flux of trees, grass, fresh and salt water, wastewater, animals such as cattle, deer, and dogs, stables, animal buildings, excrement, and food items such as butter, potato peels, cow’s milk, soil, and bananas. Since chlorination is not uniformly effective in eliminating potentially pathogenic Prototheca species from the effluents of sewage water and household waste, the algae survive and return to the environment.

A heterotroph is an organism that cannot manufacture its own food by carbon fixation and therefore derives its intake of nutrition from other sources of organic carbon, mainly plant or animal matter.

The Prototheca species of human algae is achlorophyllous; not having chlorophyll and, hence, unable to engage in photosynthesis. It is heterotrphic(see above) and require external sources of organic [carbon and nitrogen]. Their life cycle is similar to that of algae from the genus Chlorella.

It’s food is organic carbon and nitrogen. Prototheca species assimilate glucose, fructose, and galactose; disaccharides are not metabolized. All species require thiamine and oxygen for growth, but light does not promote growth.

Protothecosis is generally not suspected clinically, and patients are subjected to various treatment modalities for long periods without satisfactory results.

Treatment of protothecal infections remains controversial, and various treatment regimens have been attempted, but there has been no consistency in the clinical responses. Usually, treatment involves medical and surgical approaches; treatment failure is not uncommon. Infection is indolent, with no apparent tendency toward self-healing.