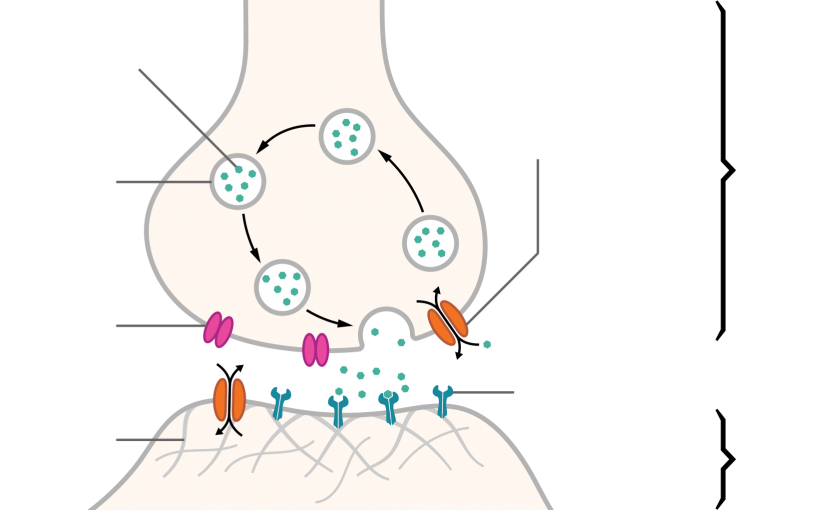 In the central nervous system (CNS), interconnections are complex. An impulse from one neuron to another may pass from

A neuron can simultaneously receive many impulses—excitatory and inhibitory—from other neurons and integrate simultaneous impulses into various patterns of firing.

Action potential propagation along an axon is electrical, caused by the exchanges of sodium and potassium ions across the axonal membrane. A particular neuron generates the same action potential after each stimulus, conducting it at a fixed velocity along the axon. Velocity depends on axonal diameter and degree of myelination and ranges from 1 to 4 m/sec in small unmyelinated fibers to 75 m/sec in large myelinated ones. Propagation speed is higher in myelinated fibers because the myelin cover has regular gaps (nodes of Ranvier) where the axon is exposed. The electrical impulse jumps from one node to the next, skipping the myelinated section of the axon. Thus, disorders that alter the myelin cover (eg, multiple sclerosis) interfere with impulse propagation, causing various neurologic symptoms.

One type of synapse, the electrical synapse, does not involve neurotransmitters; ion channels directly connect the cytoplasm of the presynaptic and postsynaptic neurons. This type of transmission is the fastest.

The nerve cell body produces enzymes that synthesize most neurotransmitters, which are stored in vesicles at the nerve terminal (see figure Neurotransmission). The amount in one vesicle (usually several thousand molecules) is a quantum. A membrane action potential arriving at the terminal opens axonal calcium channels; calcium inflow releases neurotransmitter molecules from many vesicles by fusing the vesicle membranes to the nerve terminal membrane. Membrane fusion generates an opening through which the molecules are expelled into the synaptic cleft via exocytosis.

The reaction triggered by neurotransmitter release can either excite or activate the postsynaptic neuron or inhibit or block its activity. Postsynaptic neurons receive multiple neurotransmitter signals and electrical signals from many neurons. The receiving neuron ultimately adds the inputs together, and if more excitatory signals are received, the neuron fires and sends signals to other neurons. If the sum of the signals are inhibitory, the neuron does not fire and does not influence the activity of other neurons. This adding up of responses is called summation.

Other forms of summation include

They can be quickly pumped back into the presynaptic nerve terminals by active, ATP-dependent processes (reuptake) for recycling or destruction.
They can be eliminated by enzymes near the receptors.
They can diffuse into the surrounding area and be removed.
Neurotransmitters taken up by the nerve terminals are repackaged in granules or vesicles in the axon terminal for reuse.

Malfunction of these processes can result in clinical disease. For example, loss of memory in Alzheimer disease is postulated to involve insufficiency of the neurotransmitter acetylcholine in synapses, which mediates the laying down of new memories. Certain drugs (eg, donepezil, galanthamine, rivastigmine) block the enzyme acetylcholinesterase (which breaks down acetylcholine) and thus increase the amount of acetylcholine in the synapse. As a result, memory function may improve.

Some types of single neurons can release two or more different neurotransmitters (called cotransmission)—for example, acetylcholine and glutamate. Multiple neurotransmitters may act on a single postsynaptic neuron or affect multiple postsynaptic neurons. Cotransmission allows for intricate communication among neurons to control different events in the CNS and the peripheral nervous system (PNS).

Neurotransmitter receptors are protein complexes that span the cell membrane. Their nature determines whether a given neurotransmitter is excitatory or inhibitory. Receptors that are continuously stimulated by neurotransmitters or drugs become desensitized (downregulated); those that are not stimulated by their neurotransmitter or are chronically blocked by drugs become supersensitive (upregulated). Downregulation or upregulation of receptors strongly influences the development of tolerance and physical dependence. These concepts are particularly important in organ or tissue transplantation, in which denervation deprives receptors of their neurotransmitter. Withdrawal symptoms can be explained at least in part by a rebound phenomenon due to altered receptor affinity or density.

At least 100 substances can act as neurotransmitters; about 18 are of major importance. Several occur in slightly different forms. Neurotransmitters can be grouped in different classes, such as

These amino acids are the major excitatory neurotransmitters in the CNS. They occur in the cortex, cerebellum, and spinal cord. In neurons, synthesis of nitric oxide (NO) increases in response to glutamate. Excess glutamate can be toxic, increasing intracellular calcium, free radicals, and proteinase activity. These neurotransmitters may contribute to tolerance to opioid therapy and mediate hyperalgesia.

Gamma-aminobutyric acid (GABA) is the major inhibitory neurotransmitter in the brain. It is an amino acid derived from glutamate, which is decarboxylated by glutamate decarboxylase. After interaction with its receptors, GABA is actively pumped back into nerve terminals and metabolized. Glycine, which resembles GABA in its action, occurs principally in interneurons (Renshaw cells) of the spinal cord and in circuits that relax antagonist muscles.

Serotonin (5-hydroxytryptamine, or 5-HT) is generated by the raphe nucleus and midline neurons of the pons and upper brain stem. Tryptophan is hydroxylated by tryptophan hydroxylase to 5-hydroxytryptophan, then decarboxylated to serotonin. Serotonin levels are controlled by the uptake of tryptophan and intraneuronal monoamine oxidase (MAO), which breaks down serotonin. Ultimately, serotonin is excreted in the urine as 5-hydroxyindoacetic acid or 5-HIAA.

Acetylcholine is the major neurotransmitter of the bulbospinal motor neurons, autonomic preganglionic fibers, postganglionic cholinergic (parasympathetic) fibers, and many neurons in the CNS (eg, basal ganglia, motor cortex). It is synthesized from choline and acetyl coenzyme A by choline acetyltransferase, and its action is rapidly terminated via local hydrolysis to choline and acetate by acetylcholinesterase. Acetylcholine levels are regulated by choline acetyltransferase and by choline uptake. Levels of this neurotransmitter are decreased in patients with Alzheimer disease.

Dopamine interacts with receptors on some peripheral nerve fibers and many central neurons (eg, in the substantia nigra, midbrain, ventral tegmental area, and hypothalamus). The amino acid tyrosine is taken up by dopaminergic neurons and converted by tyrosine hydroxylase to 3,4-dihydroxyphenylalanine (dopa), which is decarboxylated by aromatic-l-amino-acid decarboxylase to dopamine. After release and interaction with receptors, dopamine is actively pumped back (reuptake) into the nerve terminal. Tyrosine hydroxylase and MAO (which breaks down dopamine) regulate dopamine levels in nerve terminals.

Dopaminergic receptors are classified as D1 through D5. D3 and D4 receptors play a role in thought control (limiting the negative symptoms of schizophrenia); D2 receptor activation controls the extrapyramidal system. However, receptor affinity does not predict functional response (intrinsic activity). For example, ropinirole, which has high affinity for the D3 receptor, has intrinsic activity via activation of D2 receptors.

Norepinephrine is the neurotransmitter of most postganglionic sympathetic fibers and many central neurons (eg, in the locus caeruleus and hypothalamus). The precursor tyrosine is converted to dopamine, which is hydroxylated by dopamine beta-hydroxylase to norepinephrine. After release and interaction with receptors, some norepinephrine is degraded by catechol O-methyltransferase (COMT), and the remainder is actively taken back into the nerve terminal, where it is degraded by MAO. Tyrosine hydroxylase, dopamine beta-hydroxylase, and MAO regulate intraneuronal norepinephrine levels.

Endorphins and enkephalins are opioids.

Endorphins are large polypeptides that activate many central neurons (eg, in the hypothalamus, amygdala, thalamus, and locus caeruleus). The cell body contains a large polypeptide called pro-opiomelanocortin, the precursor of alpha-, beta-, and gamma-endorphins. Pro-opiomelanocortin is transported down the axon and cleaved into fragments; one is beta-endorphin, contained in neurons that project to the periaqueductal gray matter, limbic structures, and major catecholamine-containing neurons in the brain. After release and interaction with receptors, beta-endorphin is hydrolyzed by peptidases.

Enkephalins include met-enkephalin and leu-enkephalin, which are small polypeptides present in many central neurons (eg, in the globus pallidus, thalamus, caudate, and central gray matter). Their precursor, proenkephalin, is formed in the cell body, then split by specific peptidases into the active peptides. These substances are also localized in the spinal cord, where they modulate pain signals. The neurotransmitters of pain signals in the posterior horn of the spinal cord are glutamate and substance P. Enkephalins decrease the amount of neurotransmitter released and hyperpolarize (make more negative) the postsynaptic membrane, reducing the generation of action potentials and pain perception at the level of the postcentral gyrus. After release and interaction with peptidergic receptors, enkephalins are hydrolyzed into smaller, inactive peptides and amino acids. Rapid inactivation of exogenous enkephalins prevents these substances from being clinically useful. More stable molecules (eg, morphine) are used as analgesics instead.

Dynorphins are a group of 7 peptides with similar amino acid sequences. They, like enkephalins, are opioids.

Substance P, a peptide, occurs in central neurons (in the habenula, substantia nigra, basal ganglia, medulla, and hypothalamus) and is highly concentrated in the dorsal root ganglia. Its release is triggered by intense afferent painful stimuli. It modulates the neural response to pain and mood; it modulates nausea and vomiting through the activation of NK1A receptors that are localized in the brain stem.

Nitric oxide (NO) is a labile gas that mediates many neuronal processes. It is generated from arginine by NO synthase. Neurotransmitters that increase intracellular calcium (eg, substance P, glutamate, acetylcholine) stimulate NO synthesis in neurons that express NO synthetase. NO may be an intracellular messenger; it may diffuse out of a cell into a second neuron and produce physiologic responses (eg, long-term potentiation [strengthening of certain presynaptic and postsynaptic responses—a form of learning]) or enhance glutamate (NMDA-receptor–mediated) neurotoxicity (eg, in Parkinson disease, stroke, or Alzheimer disease).