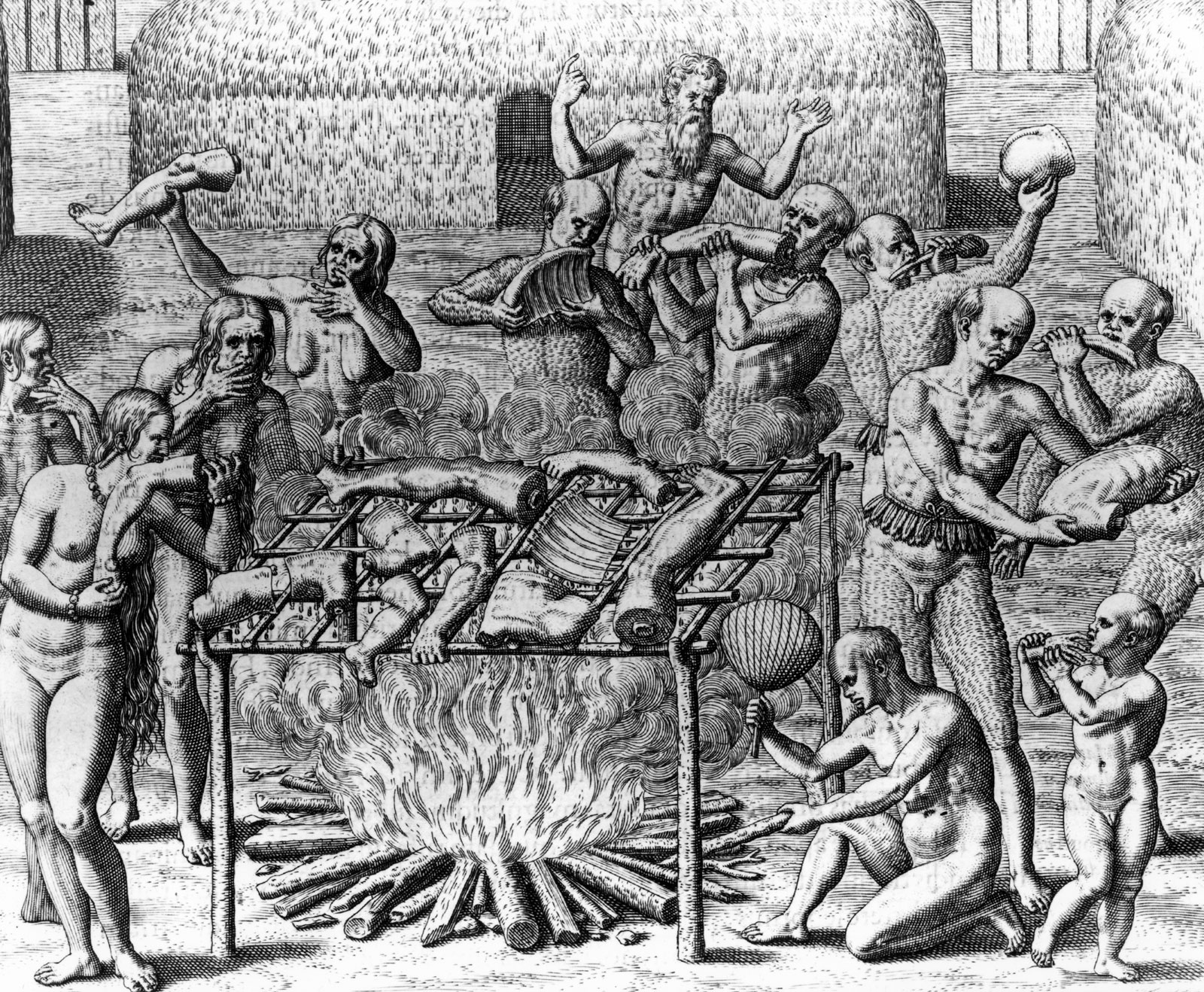 Image Credit: cannibalism in the Americas

cannibalism, also called anthropophagy, eating of human flesh by humans. The term is derived from the Spanish name (Caríbales, or Caníbales) for the Carib, a West Indies tribe well known for its practice of cannibalism. A widespread custom going back into early human history, cannibalism has been found among peoples on most continents.

Though many early accounts of cannibalism probably were exaggerated or in error, the practice prevailed until modern times in parts of West and Central Africa, Melanesia (especially Fiji), New Guinea, Australia, among the Maoris of New Zealand, in some of the islands of Polynesia(Pacific Islands), among tribes of Sumatra, and in various tribes of North and South America.

In some regions human flesh was looked upon as a form of food, sometimes equated with animal food, as is indicated in the Melanesian pidgin term long pig. Victorious Maoris often cut up the bodies of the dead after a battle and feasted on the flesh, and the Batak of Sumatra were reported to have sold human flesh in the markets before they came under full control by the Dutch.

In other cases the consumption of particular portions or organs was a ritual means by which certain qualities of the person eaten might be obtained or by which powers of witchcraft or sorcery might be employed. Ritual murder and cannibalism in Africa were often related to sorcery. Headhunters and others often consumed bits of the bodies or heads of deceased enemies as a means of absorbing their vitality or other qualities and reducing their powers of revenge (see also headhunting). The Aztecs apparently practiced cannibalism on a large scale as part of the ritual religious sacrifice of war captives and other victims.

In some cases, the body of a dead person was ritually eaten by his relatives, a form called endocannibalism. Some Aboriginal Australians performed such practices as acts of respect. In other cases, ritual cannibalism occurred as a part of the drama of secret societies.

There is no one satisfactory and all-inclusive explanation for cannibalism. Different peoples have practiced it for different reasons, and a group may practice cannibalism in one context and view it with horror in another. In any case, the spread of modernization usually results in the prohibition of such practices. In modern society cannibalism does [STILL] occasionally occur as the result of extreme physical necessity in isolated surroundings.

More on Cannibalism -H2G2 The Hitchhiker’s Guide to the Galaxy: Earth Edition

The word cannibalism comes from the Spanish name for the Carib – Caríbales or Caníbales – a West Indies tribe, and describes animals which prey upon their own species. In this sense it has been found among lions, pigs, ants, otters, apes, poultry, mantis, spiders, scorpions and many other animal species. In a narrower sense, cannibalism denotes humans who eat humans. This is called anthropophagy, from the Greek anthropophagos, literally meaning ‘man-eating’.

There can be various evolutionary advantages to cannibalism. One is to get rid of competition by eliminating a rival. Some insects, fish and amphibians eat their companions when food is rare. Another reason is that if there are fewer animals of a particular kind, predators may search for a better stomping ground elsewhere. Sometimes, it is also a means of prevention of over-population. Once a lion becomes leader of a pride he will kill all newborn lions, which renders the lionesses fertile and serves for him to create offspring from his genes.

Sexual cannibalism is to be found among spiders and scorpions where a female eats the male after copulation. Mantis males must be decapitated before fertilization can occur, and they serve as a protein meal afterward.

“In September 1858, the ship St. Paul, bound from China to the Australian gold-fields, and carrying some three hundred Chinese coolies, was wrecked on an outlying sandbank of Rossel. The European officers and crew took to the boats and made their way to Queensland, the Chinamen being left to shift for themselves. Thus abandoned to their fate, the Chinamen were discovered by the islanders, and were by them liberally supplied with food and water; when well fattened they were removed in canoes to the main island, in lots of five and ten, and there killed and eaten. The Chinamen, when removed, were under the impression that they were merely taken in small numbers as the native canoes could only carry a few passengers at a time, being ignorant of the distance of the sea journey. As they left their awful sandbank in the canoes, they sang paeans and chants of joy, which the quick-eared natives picked up and incorporated in their songs.”

Some Experiences Of A New Guinea Resident Magistrate